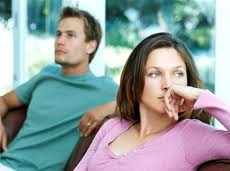 Step 1:  Be Careful with the When and How

If you’re like most people trying to get your partner to join you for couples therapy or coaching, you are most likely frustrated with your relationship and with your partner.  You don’t know what else to do.  So you get mad and you say, “we need serious help.”

It’s very important when and how you bring up the idea of going to couples therapy or coaching.

Getting angry at your partner isn’t going to help him want to engage in couples therapy or coaching with you.  It will probably cause him to pull away and hide from you even more.  (If you missed my recent post on how to get your partner to open up, check it out here.)

Don’t even think of bringing up the idea of getting help with him in the middle of a fight.  And don’t do it in angry (even if you are angry beyond belief).

Instead, find a time when you’re getting along.  From a loving place that won’t feel threatening to him, let him know that you cherish times like this when you get along.  Tell him you want more of these times.  Let him know how much you value your relationship and want it to be better.

Make sure you are feeling calm when you tell him this.  If you can even allow yourself to get a little vulnerable with him, letting him into your fears that the two of you will never be able to figure it out, your chances of him hearing you will be even higher.

It’s hard to really be vulnerable when your relationship is strained.  Even if you *think* you are being vulnerable, you may still feel frustrated and sound a little hostile.  Check yourself before opening your mouth.

You are taking a big risk by wearing your heart on your sleeve and he may still reject the idea, but it’s worth everything you have to save your relationship.

Step 2:  Own Up To Your Part of the Problem

You may feel that the problems in your relationship are really his fault, but I can assure you, they probably aren’t.

Let’s face it, it takes two to tango.  And you are half of this relationship.

Even if you can’t believe me that you have something to do with the problems in your relationship, act as if you do.

I’m telling you this so that your partner won’t think that you are hoping to get him to therapy so that he’ll shape up and you’ll just stay the same.  Whether you like it or not, you will be a large part of the process.

If you’re the one who wants to go to therapy or coaching, my bet is that you might have the tendency to be a little critical.  In fact, your partner might feel constantly criticized by you.  The last thing he wants to do is go to therapy with you so that he will be told not only by you but by the therapist that he’s wrong (even though that’s not how it works).

The thing is, your partner is probably scared of you.

And couples therapy or coaching probably feels like a boxing ring to him where he’s guaranteed to face a Total Knock Out.

So if you come from a vulnerable place in telling him of your fears and hopes for the two of you, he’s going to be more likely to hear you.  If he learns that you aren’t just a tough boxer ready to fight him, but your hands are actually trembling scared underneath those gloves, he’ll be less afraid of you.

If you own up to your problematic behavior in your relationship, he’ll be less likely to think it’s going to be all about him.

Once you let him know where you’re coming from and that you are interested in couples therapy or coaching because you value him and your relationship so much, you need to educate him a little bit on what to expect.

Don’t fret if you yourself don’t know what to expect yourself.  That’s why you’re reading this!  I’m going to cover the basics of what you can tell him now.

And let him know about the results that he can expect by going to therapy with you.  Here are just a few:

Lastly, make sure you let him know how much you appreciate him, especially if he agrees to go.

Ask him what you can do to for him to express your appreciation, whether it’s going to that horrible movie with him that he wants to see, cooking him dinner each night for a week, or something else all together.

I hope this helps.  More importantly, I hope it works.

Check out my book, Your Best Love: The Couple’s Workbook and Guide to Their Best Relationship, especially written for couples who are ready to create a stronger relationship but dread the thought of couples counseling or coaching.

Cheers to your best relationship,