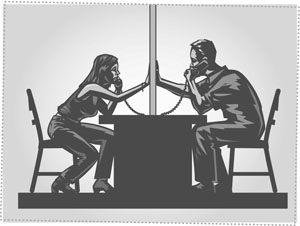 Today I won’t be writing about any of those, but about the other E-Word:  Empathy.

This blog post was inspired by a video posted on an email listserv that I belong to for Emotionally Focused Therapists, and I thought I would share it with you and discuss the importance of empathy in your relationship.

Empathy is important because it helps us understand someone else’s experience.

They are in my office every day: going around in the same circles, feeling unimportant to the other, and picking fights over the small things.  At the end of the day, what I most often see in the couples with whom I work are two struggling people desperately trying to connect, but getting in their own way.

They both want to feel important, understood, valued, seen, and appreciated by their partners.

But they feel insignificant, misunderstood, not valued, invisible and taken for granted.

I often use the analogy that when someone is bleeding and covering up their wounds, they can’t pay attention to the wounded around them.  This is what happens when 2 people are hurting in a relationship.  It’s hard to see past their own pain to see that their partner is bleeding as well.

Can you identify with either of the following people?

Person A, let’s call her Heather.  She feels like her partner just doesn’t care sometimes.  He shuts down, pulls away, and she feels unimportant and not appreciated.  She’s frustrated all too often and can become critical.  Underneath her hostility are feelings of loneliness and fear that she just doesn’t matter to her partner.

Person B, let’s call him Ed.  He feels like he can never get anything right by his partner.  He feels like he is constantly being criticized and the only thing he can do to avoid a fight is to pull away or shut down.  Underneath what seems like his apathy is a sense of hopelessness that he is never going to please his partner.

If you are distressed in your relationship, you might identify with either of those depictions to some extent.

Heather and Ed are opposite sides of the same coin.

They are in a relationship together, and each cares more than the other can realize.

Heather sees Ed as apathetic and all of his actions confirm that to her.  If Heather wasn’t in so much pain herself, or was able to step outside of her own pain (which is very difficult to do), she might be able to see that Ed cares so much, but just feels like no matter what he does, it won’t please her.  But underneath her anger, Heather feels invisible, lonely and scared that she doesn’t matter to Ed.

Ed sees Heather as someone who loathes him.  He would love to make her happy but he feels like no matter what he does, he can’t.  Even though he is tired of being yelled at, he may think highly of her and have this underlying sense that he’s just not good enough for her.  He withdraws because he hates the arguments and feels hopeless.  He has no idea Heather is actually feeling lonely and that when he pulls away, it reinforces her sense that she’s alone.

It’s hard to feel empathy for someone when it feels like they are hurting you.

But for both Heather and Ed, if they knew what was really going on for each other underneath the exterior, they would realize how important they are to each other.

That’s probably why when I meet with couples in distress, there is rarely a shared sense of reality.  They are looking at the same thing from very different perspectives.  Whether it’s Venus, Mars or Pluto, it seems like the two people in front of me come from different planets.  But they usually want the same thing.

Only through empathy can they understand this, and once they do, the rest becomes easy:  they recognize their value in their partner’s eyes, they realize they are more important than they imagined, and they find the strength to work through their differences.

So next time you’re in a fight, try to step outside yourself for a second and see your relationship through your partner’s eyes.  It’s not easy, but it can be done.

Oh, and here’s that video that inspired this post:

I’d love to hear your comments.

Cheers to your best relationship,