Hey fired up business owner, forward this one to your partner if it resonates, will you? 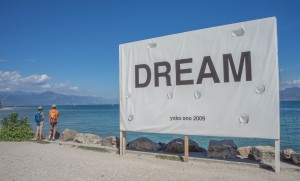 To the partners of entrepreneurs:

Your significant other’s business could NEVER replace you.

In fact, YOU are part of the dream, even though you feel totally marginalized by it at times.

When your significant other is doing her work in the world, she is thinking of you.

She wants you to be a part of it.

It could never replace you.

She doesn’t realize that you forget these things, as you understandably do, when she gets swept away by the tide of entrepreneurship.

She forgets how much she means to you too, and how lonely you can get when all she’s focused on is her next conquest in business and taking her work and impact to the next level.

She might have no idea that you even miss her.

She might tell herself she resents that you aren’t going after some kind of vision too. But really? That’s her resenting herself for playing smaller than she needs to play.

She might tell herself she resents you for not supporting her in her business efforts.

Between you and me, she has NO idea that you don’t support her in her business efforts because they take her away from you.

You probably feel like you DO support her in her business efforts.

She doesn’t see or understand or appreciate EVERYTHING you are doing behind the scenes while she’s working her tail off.

But to her, she just hears your resentment of her business.

Admit it, aren’t you pissed even just a little when she accepts some other obligation that means she’s going to be busier?

Even though you love her for being so driven, don’t you wish sometimes she was more “normal?”

You can’t help but feel that way when her business has come between you.

It doesn’t have to be that way.

This love triangle doesn’t have to exist between the 3 of you.

Here’s what I suggest:

Let her know you just miss her, and if you’re seriously worried that her business is somehow gonna replace you?

Ask her if there’s a possibility that might happen.

You’ll likely be pleasantly surprised at the answer you receive.

Is any of THIS a surprise?

Read this as a couple, discuss (like in Linda Richmond’s Coffee Talk) and let me know in the comments.