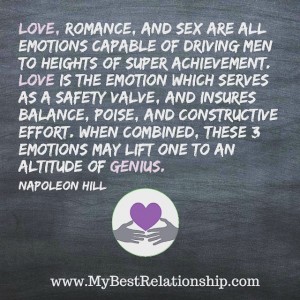 Love is the most powerful force on earth.

It literally got my own husband to quit smoking after we met, simply because he wanted to be a better person (I didn’t even ask him to).

You probably know the feeling of being in love: You’re on top of the world.

It is the best feeling there is.

Of all the many successful men he interviewed, he noted that nearly every single one of them had the love of a woman behind him (this was before women were recognized for being successful, and before men were married to other men. Let’s excuse Dr. Hill’s sexist & heteronormative speak, this was back in 1937).

That high doesn’t last forever, though.

Our brains get used to the surge of neurochemicals flooding us, and eventually we stop obsessing over each other and we start sleeping again.

Lust fades and gives way to what’s known as attachment.

This is an interesting juncture in a relationship, and one that often gets a bad rap.

It’s at this point at which the obsessiveness dies down. You’re not as consumed by each other.

You start becoming familiar and comfortable with your partner, like that soft old tee shirt you’ve had for over a decade, that you don’t always think about, and maybe even take for granted.

If you get love right, though, this same juncture where long-term love starts to get a bad rap is where the real magic of love begins.

This is what Napoleon Hill is talking about when he refers to love as a “safety valve.”

The British psychiatrist, John Bowlby, who was 30 at the time Think and Grow Rich was published, was the first in the sphere of psychology/psychiatry to describe love as a “secure base.”

Love is a safe haven.

Bowlby’s work, which was heavily rejected at first (and still not widely embraced when it comes to adult relationships), demonstrated how when a parent and child had a safe and secure emotional relationship, the child was more independent and free to go out and explore the world.

He believed this need to connect was with us “from the cradle to the grave,” and that adults need these safe and secure loving connections as much as children do in order to feel stronger and more independent.

Despite psychoanalysts of his day rejecting this idea of the need to connect, and many within the field of mental health and popular culture still upholding values of autonomy and independence over safe and secure dependency, cutting edge neuroscience is proving Bowlby and Hill right.

Love is like a parachute that enables us to take bigger leaps. 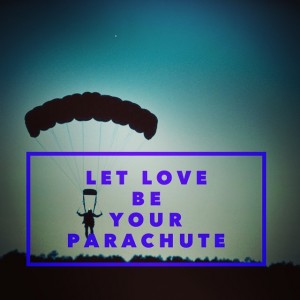 When you’re a business owner, that parachute can make the difference between whether you take the right risks in your business or not.

When you’re backed up by the love and support of a partner, it can help you be more independent, braver and more vulnerable in the face of the all too common social rejection that entrepreneurship opens us up to.

And, when you mix it with romance and sex, it can lift you to an altitude of genius, as Napoleon Hill points out.

But here’s the rub:

Your business can compete with your relationship.

You can fall in love with your business in a way that neurochemically sends the same obsessive, rewarding molecules rushing through your brain as when you first fell for your partner.

It can be like an affair or substance addiction.

And to thrive in love, that ain’t cool!

So what do you do?

Never forget the value of your parachute, even if it feels a bit deflated, or more like an anchor at times weighing you down.

Honor it, remember its importance, and continue to cultivate your emotional connection with your partner.

Never buy into the myth that love doesn’t last or that you can’t have it all in business and love.

When you’re building up a relationship or a business, things may seem off kilter.

That’s okay, just remember to give your attention, love and faith to both, and you’ll see your relationship and business flourish.

Lift up to an altitude of genius.

If you’re struggling in love as you grow or maintain your business, hit me up for a free consult, and we’ll figure out what needs to happen to get that parachute wide open again.