We’re born alone, we live alone, we die alone. Only through our love and friendship can we create the illusion for the moment that we’re not alone.   – Orson Welles

That quote pretty much sums up the mainstream ideology that I see on a regular basis.

Independence, autonomy, self-sufficiency – that’s what everyone seems to be striving for.

Are we really alone, or is that the illusion?

More and more research in the fields of neurobiology and psychology is demonstrating how we are more connected and interdependent than we have ever realized.

The front of our brains have special neurons called “mirror neurons” that exist to help us understand and empathize with one another.

We are a social species, and the truth is, we need each other to survive.

All of the technology that exists has not eradicated that need from our basic biology.

For everyone, but especially to all of my lady bosses who own businesses, this is a truth I wish to shout from the mountaintops:

You are better off when you are stronger in love. 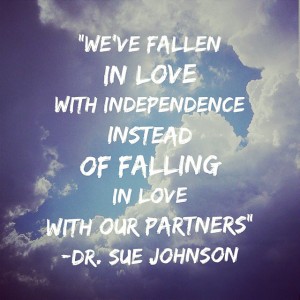 So many women entrepreneurs I see turn away from their partners when they hit road bumps in their relationships, and throw themselves into their work.

They know what to do to receive both emotional and financial rewards from doing what they love. And their work is a bit more easy to control than their significant others.

These women, either implicitly or explicitly, believe they can’t have it both ways: A strong relationship and a thriving business.  So they shut their partner out, go it alone, and opt for putting everything into their businesses.

I’ve often heard it said how much more painful it is to feel alone when you are in a relationship than when you are simply single.

People use life and death metaphors to describe how painful this feels.

And it makes sense, because biologically, when you are disconnected from your partner, your brain and system get the message that there is something terribly wrong.

See, we’re a tribal species, and many of us live now in a tribe of two.

When that connection from our tribe is cut off, it can feel as dangerous as some kind of physical assault.  That’s because social and physical pain register in the same part of the brain (for all you nerds:  The anterior cingulate).

That’s why when you’re suffering from a break up, it might feel like you’ve been hit by a truck.

That’s why when you’re disconnected from your partner, your body gets the message on a physical and emotional level that something is wrong.  You can try to ignore it cognitively, but this disconnection can still eat away at your attention, creativity and processing speed.  (You need all of these things to be your best in business, by the way.)

Stronger relationships make for stronger brains, and stronger businesses as a result.

There’s ample research out there that proves it.

Click here to read about one amazing study on that topic. 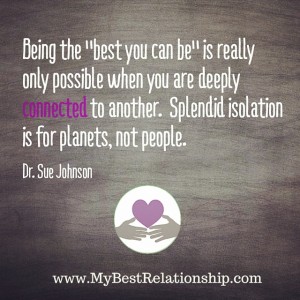 Here’s a quick story that maybe you can relate to:

Kathy was an entrepreneur who was married, but felt no support from her husband around her business, and felt disconnected from him overall.

She came to me ready to throw in the towel with her relationship so she could just focus on her business.

“It would be so much easier,” she told me, “without my obligation to Mark.  I wouldn’t have to deal with him, his stinginess, his doubting me, or any of that.  I could just work on my business without having to ever answer to him.  I’d be so much better off and so would my business.  I don’t know what I was thinking getting married.  I’m going to be so much better off alone.  We’re all alone anyway at the end of the day.”

She felt that she was no longer compatible with Mark.  He just didn’t get the business stuff at all.  He didn’t show her support, his attitudes around money were entirely different than hers, and he didn’t understand that all of her time spent at the computer she was actually working and not just playing around on the internet.

But obviously there was some part of her that wanted to give the relationship one last shot. Otherwise, she wouldn’t have hired me.

There was a deep sadness that she was looking away from, trying to shut off.

We discussed how she could speak with Mark in a way that didn’t expand the distance between them, but pull them closer together.

It became clear that a lot of what was separating the two of them were assumptions and beliefs that were not actually true.

Kathy got in touch with that part of herself that wanted to make things work, which was the same part that got buried and lost under this idea that we were born to be alone.

She then took some risks to see if things could change.

Within a matter of weeks, the relationship shifted.  They became more connected, were able to understand each other better, communication improved, and Mark became more understanding about Kathy’s business.

As a result, Kathy felt freer, stronger and more clear in her business, and was able to run her business in a way that felt expansive and joyful.  She was also able to enjoy a home life that didn’t leave her resentful and bitter.

We are wired for connection.

People  need people and we can’t go it alone and still be our best.

This is just as true for you as anyone else.

If you are feeling alone in your relationship or wondering whether you should throw the towel in to go it alone, but have some questions about that, contact me to see if it makes sense to work together to get some clarity.